It finds that just 11 of the major exporters assessed for their enforcement of the OECD anti-bribery convention have achieved active or moderate law enforcement, while most others allow bribery of foreign officials to continue unchecked as their companies strive to secure lucrative contracts. 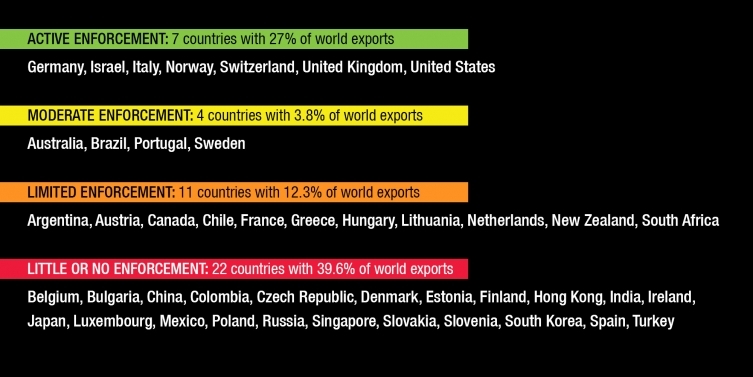 They include Germany, Israel, Italy, Norway, Switzerland, the UK and the US, where such laws are actively enforced, in addition to Australia, Brazil, Portugal and Sweden, where enforcement is “moderate”.

However, in six EU member states from Central and Southeast Europe — Bulgaria, the Czech Republic, Estonia, Poland, Slovakia and Slovenia — there is little or no enforcement. Nor are western members of the bloc any better; six West European EU members also fail to enforce laws, along with Russia, Turkey, China and a number of other major economies from around the world.

And there is only “limited enforcement” of such laws in a further 11 countries, including Austria, France, Greece, Hungary, Lithuania and the Netherlands.

The report also shows a lack of progress with the situation worsening since the last report was published in 2015 in China, Hong Kong, India and Singapore, which together account for 6.7% of world exports. None of the four are signatories to the OECD convention.

“The results show that we are far from bringing enforcement against foreign bribery to a tiping point. Governments must scale up their foreign bribery enforcement. This means investigating allegations and pressing charges, as well as courts convicting guilty individuals and companies, and imposing substantial sanctions where appropriate,” Transparency International’s report says.

Looking at the consequences of the failure to enforce legislation, it warns that: “Foreign bribery has huge negative consequences for the economies of the nations targeted. Money gets wasted on deals that are overpriced or do not yield real benefits. Limited resources are diverted to benefit a few individuals while citizens are denied vital public services, such as access to clean water, safe roads or basic health services.”